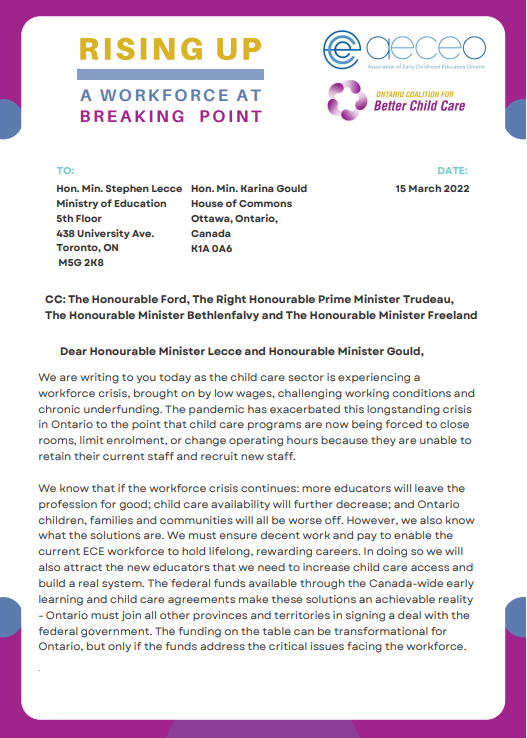 The AECEO and OCBCC are launching a new campaign: A Workforce At Breaking Point - Rising Up. We are sharing the stories of ECEs and raising our voices together about the early learning and child care workforce crisis. It is critical that the issues of facing the child care workforce are addressed in the federal-provincial funding agreement. We are calling for a wage grid and decent work standards as essential elements in a federal-provincial agreement. 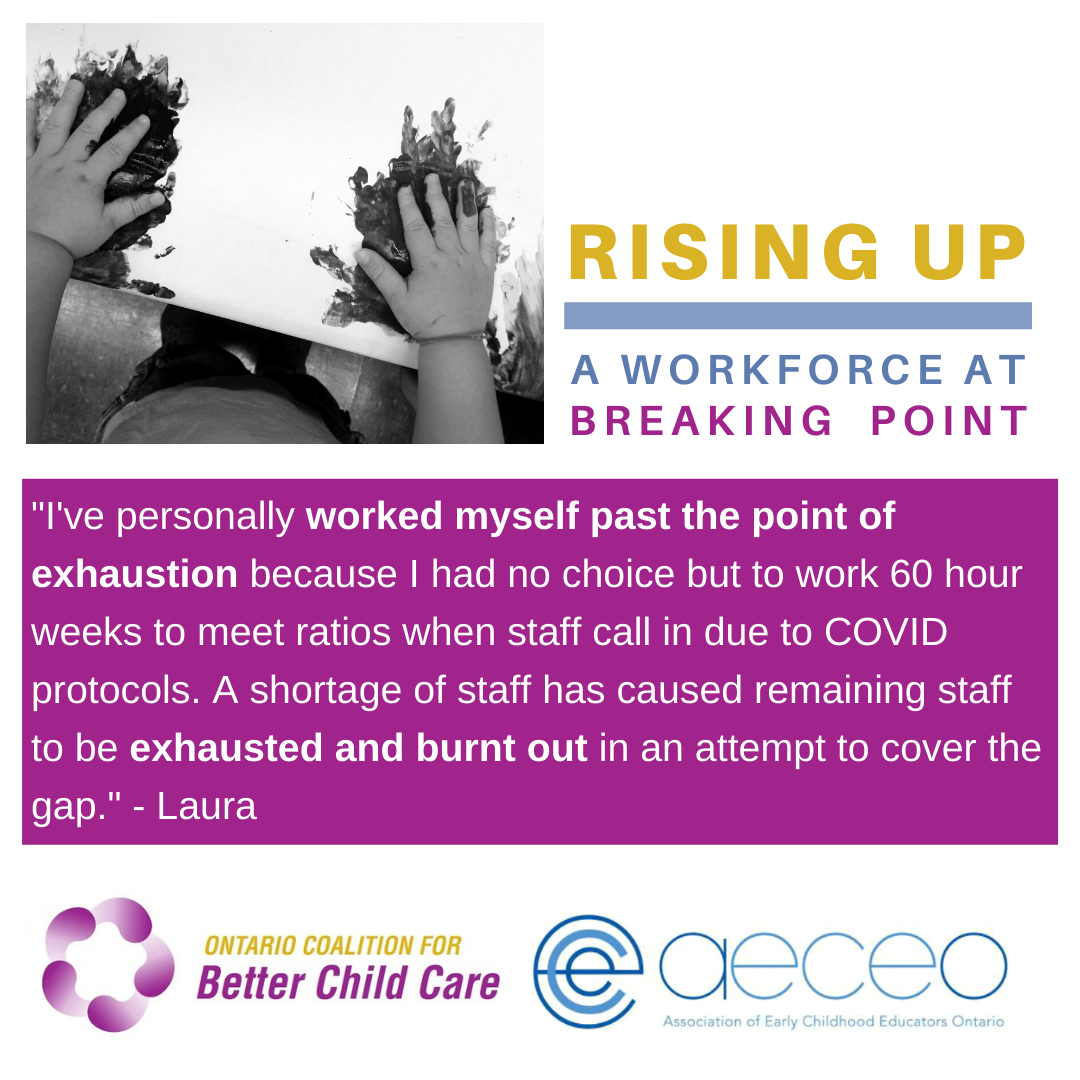 Breaking Point Story #4, Laura: "A shortage of staff has caused remaining staff to be exhausted and burnt out in an attempt to cover the gap. These remaining staff question whether the work they are passionate about is worth the burn-out/toll on their mental health and often end up looking elsewhere for less exhausting jobs that pay better, which causes a spiral of the loss of a staff leading to more staff loss. I've personally worked myself past the point of exhaustion because I had no choice but to work 60 hour weeks to meet ratios when staff call in due to covid protocols. When educators have to call in ill due to COVID protocols but there is no one available to cover them due to lack of employee retention it creates a great sense of guilt in educators, putting a toll on their mental health, and also leads to room or centre closures because we can't meet ratio if staff become sick.

We can't run at full capacity due to the staff shortage which exacerbates a shortage of childcare in our region. At bare minimum we have 30 childcare spaces (from infant to school-age) that cannot be filled due to lack of staffing but over 150 children on our waitlist waiting for care. This is untenable for both educators and families." 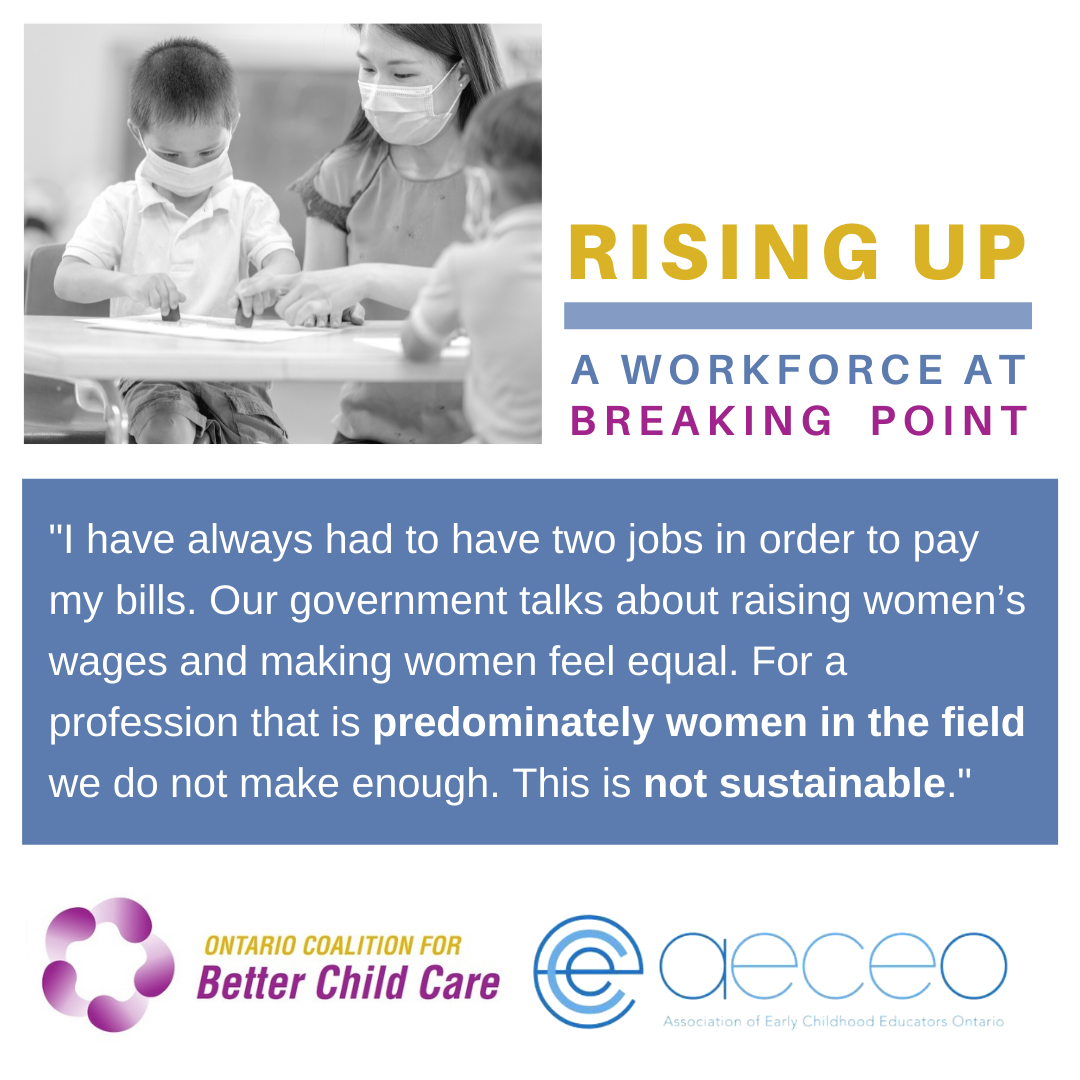 Breaking Point Story #3, Miriam:  "I have always had to have two jobs in order to pay my bills. As a single independent 34 year old woman I cannot afford to pay rent and live on my own. $37,000 after taxes is not enough to live off of or save for the future. Our government talks about raising women’s wages and making women feel equal. For a profession that is predominately women in the field we do not make enough. This is not sustainable." 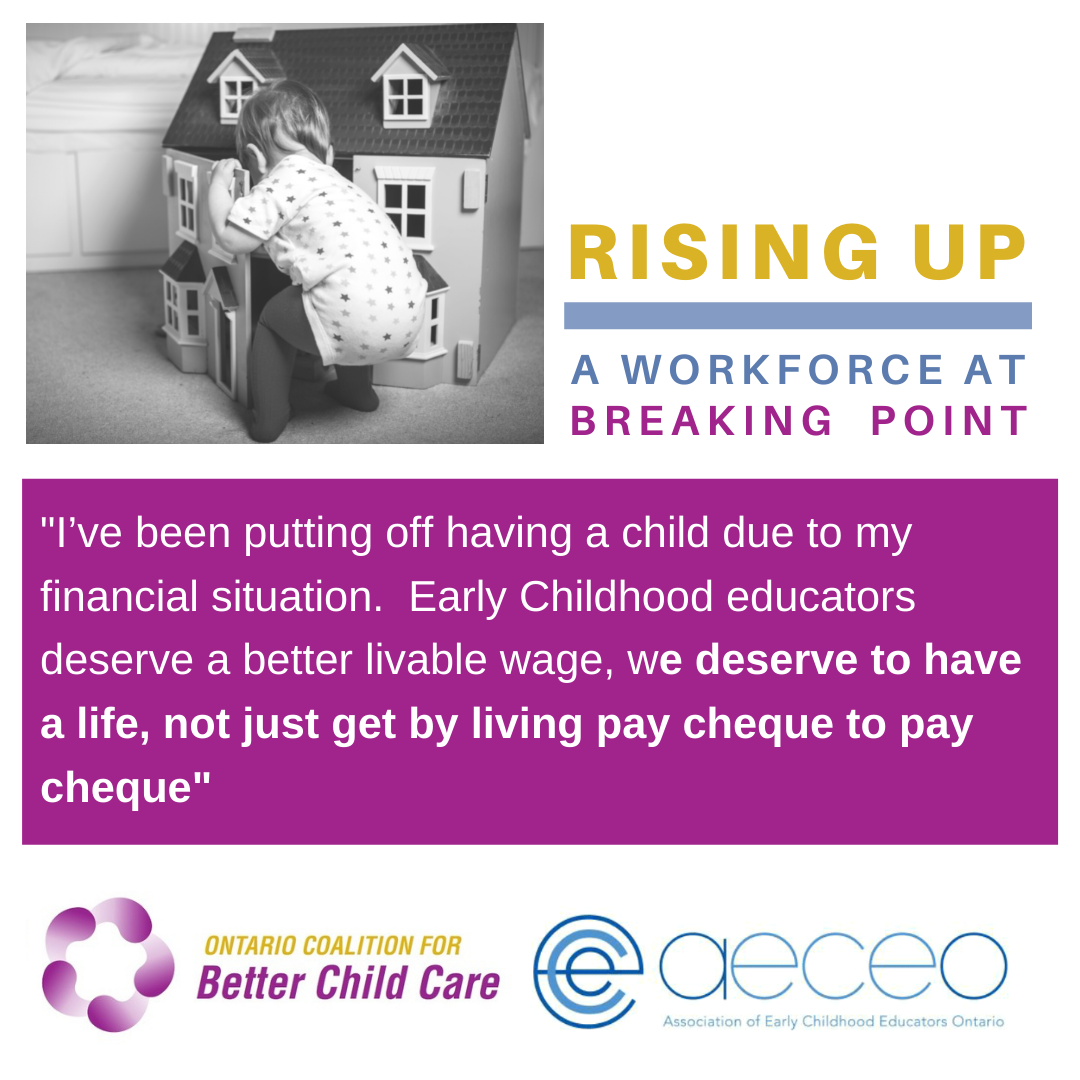 Breaking Point Story #2, Lara*: "I’ve worked in child care for over 12 years. It has only gotten worse – with less workers and more work as our centre is constantly short staffed, and unable to retain staff. After 12 years of work I get paid 51 cents more than someone who gets hired at my work as a contract staff. I don’t even make $19/hour. I have no pension.

I’m unable to afford legal housing for myself and my partner, and I am constantly wanting to leave my job and the profession. I've been putting off having a child due to my low wages. I fear not being able to properly afford children and pay for my own daycare expenses.

Early Childhood Educators deserve a better livable wage. We went to college, we have diplomas. We deserve to have a life, not just get by, living pay cheque to pay cheque. We deserve more." 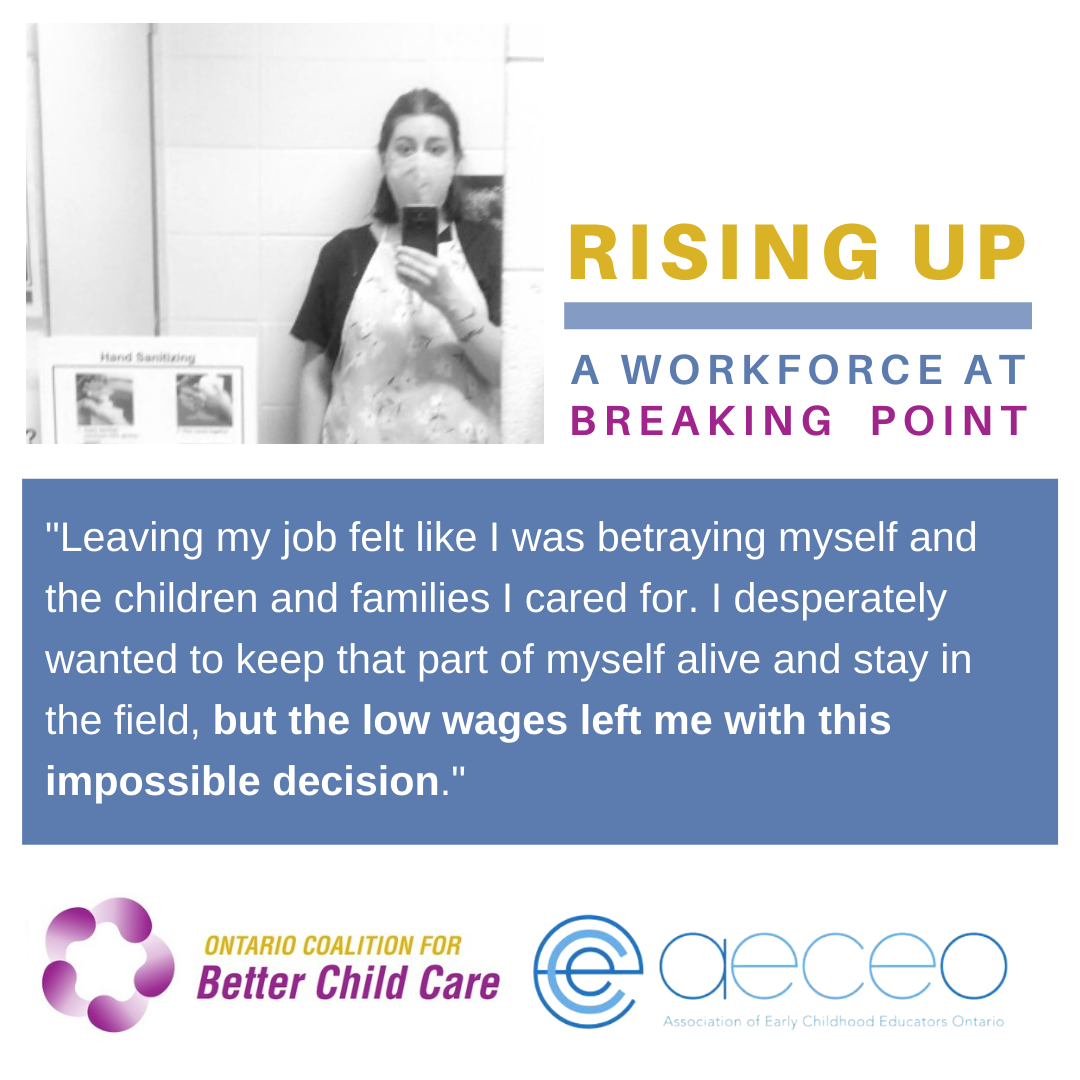 Breaking Point Story #1, Rachel: “I chose to become an ECE because I wanted a purpose that was more than a job. Something that felt meaningful and important. And what could be more important than caring for young children?

When I graduated, I got a job at a childcare centre working a split shift. I was so thrilled and excited to begin doing the work that I loved. Once I began working, I quickly realized my job as an ECE was destabilizing my life. Because of my low pay, I could not justify the $15 cost of taking transit to work each day. So, every day, regardless of the weather, I would bike to work, back home at the end of my split shift, then bike back to work, and then bike home at the end of the day. It was a 20-minute ride four times a day, and combined with the physical demands of my work, I was exhausted. By the end of the day, biking up the large hill on my route home from work felt almost impossible.

Then COVID happened and the demands of my work and the daily pressures increased. I no longer got to spend one-on-one time with children, and spent most of my day sanitizing with bleach, which would sting my nose even through my double layered mask. In the afternoon at pick up, when I was outside with the toddlers, things almost felt normal. The children were laughing and playing, and I could wave to parents as they waited at the gate to pick up their children. At this point I had decided to leave the centre to go back to school and get my degree so I could hopefully make more money, but this glimmer of normalcy made me doubt my decision to leave, even when the work was crushing me.

The fact was, I wanted to be in the toddler room, not back in school. But working as an ECE felt like being in an abusive relationship: I was given just enough hope to want to stay. The childcare system felt abusive, and I knew I had to leave. Leaving my job felt like I was betraying myself and the children and families I cared for. I desperately wanted to keep that part of myself alive and stay in the field, but the low wages left me with this impossible decision.

I left the job that I loved because I did not make enough money. I never thought I was a person who cared about money until I did not have enough. If I had been paid better, I would still be in that toddler room caring for and educating children and living my values as the ECE I know I could be. ECEs need better pay to stay in their jobs. Recruitment and retention are directly tied to starvation wages. I am an example of this. ECEs do not deserve to be so exhausted at the end of the day that they cannot climb the hill to get home. If the childcare system can take care of what matters by giving ECEs livable wages I know we will have a solid childcare system with ECEs who can afford to stay in their jobs.”

* Some names may have been changed to protect participants' privacy.