The case for national child care 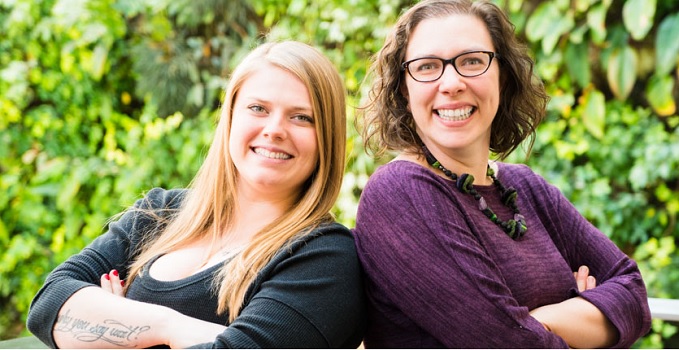 Lyndsay Macdonald is the Research Officer for the Childcare Resource and Research Unit and the National Coordinator of the Child Care Advocacy Association of Canada; Carolyn Ferns is Public Policy and Government Relations Coordinator for the Ontario Coalition for Better Child Care.

During a recent visit to UofGH, the child care advocates gave a public lecture on the state of early childhood education and care in Canada, as discussed during a national policy conference held in the fall of 2014.  The ChildCare 2020 conference attracted educators, advocates, researchers, policy makers and politicians, and saw a unified vision paper and campaign emerge as a result.

Macdonald and Ferns spoke with us about the way things are now, the way things could be, and why child care should be top of mind as our next federal election inches closer.

In Conversation with Lyndsay Macdonald and Carolyn Ferns.

UofGH:  The timing of the ChildCare 2020 conference last fall coincided with Stephen Harper’s announcement of his government’s plan for income splitting tax breaks and for expanding the universal child care benefit.  How was that news received by those in attendance?

CF:  There was certainly a lot of discussion about this.  Though this was a non-partisan conference, the issue with the Conservatives’ policy has always been that it’s not actually a child care policy.  The universal child care benefit is a direct payment for families, with no stipulations around it being spent on child care.  It doesn’t do anything to address issues in child care.

It doesn’t create more spaces, it doesn’t address issues in workforce, and it doesn’t, in large part, make child care more affordable for families.  Even if $100 is extended to $160 [per month for kids under six], it’s a very small portion of what parents actually pay for child care.  Parents are paying over one thousand dollars per month.

UofGH:  Part of the campaign that came out of the conference includes exposing some of the dangers in inequitable approaches to child care.  Could you elaborate on this?

CF:  Canada now has a market-based approach to child care.  This has proven to be a broken system.  It’s an issue of quality.  There needs to be a system whereby the funding should go, in large part, to the system as a whole, so that you can create spaces where you need them.

In leaving it to the market, you’re not necessarily going to get the child care spaces where you need them.  You might get them only where they’re profitable to run them.  But that leaves a lot of communities out.

What we’re looking for is more public planning.  I wouldn’t say that all child care needs to be government-run – there’s a large role to be played by the non-profit sector and community groups.  Historically, that’s how good quality child care has started.  But the problem is, over the years, it’s been up to them to carry the can.

LM:  The market doesn’t work for child care.  We’re talking about the care and education of young children.  So commodifying [sic] that – you have parents paying a very high fee, which pays for the centre and its staff.

One of the fundamental problems of relying on this market-based approach is that parent fees are tied to wages, which are then tied to staff and ultimately, to quality.

UofGH:  How would a national child care program for Canada improve the situation?  What is the vision for 2020?

CF:  The vision begins with the fundamental idea that childcare is a necessary service for families – but also a valuable part of our social infrastructure, and should be seen as much.  It’s a public good.  It’s good for families, it’s good for children, and for society as a whole.

We see child care in 2020 as a system across Canada, where the federal government has a role in shaping policy and providing support and funding; provinces have a central role in designing and administering service systems; and at the local level, the community has an important role in implementation.

LM:  So all three levels of government would come to the table and work together.  In this vision, we see the federal government playing a strong leadership role in delivering child care provisions and working with provinces, territories, and Indigenous communities.   This is especially important [for equity and accessibility] as services can be lacking in rural, remote and Indigenous communities.

UofGH:  This was the first national child care policy conference in a decade, the fourth in Canada’s history.  How has the context surrounding child care today influenced this vision?

Our biggest problem lies in this 20%.  And because of this, families have to rely on piecing together unregulated arrangements and having to pay exorbitant fees.  That’s the crux of it.  No amount of tax measures has made a difference to that.  It doesn’t help create the spaces.  We need more policy and we need more funding.

LM: The money does exist.  There is a universal benefit and now income splitting.  These are two very big price tags.

UofGH:  It’s expected that Harper’s new tax-cut measures will cost the federal treasury about $26.8-billion over the next six years.

LM:  And so, it’s a reorganization of priorities.  And that decision lies with the voters.

UofGH:  Child care is being discussed more than in recent years as federal parties make their platforms known in anticipation of the election.

CF:  This election is exciting because I think child care is going to be a key issue. For us, as a non-partisan organization, we just want for people to think about child care when they’re going to the ballot box.  Think about what’s possible.

The idea of having a national child care system in Canada is not radical.  It’s long overdue.  The famous [Supreme Court Justice] Rosalie Abella quote [from 1984], “child care is the ramp that provides equal access to the workforce for mothers” has been true every year since.  It’s time to move on this.